What You Should Know About Bats

Which Type of Bats Enter Into My Home

Two kinds of bats in Hunterdon County and in New Jersey as a whole are often found roosting in colonies inside buildings, the big brown and little brown bats. Other bats, called solitary bats, do not usually enter buildings.

The big brown bat, large with a wingspread of about 14 inches, is our most common species. Colonies of up to 200 individuals return each spring to thousands of homes and other buildings in New Jersey. Although long-lived, reproduction is slow; only one or two young are born each year. If left undisturbed, a colony of bats will return to the same roost each spring for many years. The big brown bat accounts for over 75 percent of the bat contacts with people and pets and is the bat most often tested for rabies.

Getting Rid of Bats in My Home

The only permanent method to get rid of bats from a home and keep them out is to exclude them by bat-proofing. There are no chemicals registered in New Jersey for killing bats, and the use of unregistered pesticides only increases the chances that children and pets will come in contact with sick bats.

Bats often roost in dark, undisturbed areas, such as attics and wall spaces. The entry points are often near the roof edge, such as under the eaves, soffits or loose boards, openings in the roof or vents, or crevices around the chimney. Sometimes bats will roost behind shutters or under boards without entering the home. While the objective is to seal off all of the actual and potential bat entry points, care must be taken to follow the correct procedures to avoid blocking the bats inside the roost.

How & When Do You Have Bat Proof

Sometimes the only evidence of the presence of bats in a building will be an accumulation of droppings in one area of the attic, or droppings and rub marks on the siding at the bat entry opening. To confirm their presence and locate the openings used by bats in the warmer months, observe from the outside for bats leaving before evening, from one-half hour before until a one-half hour after sundown. Once you have determined the principal entry points, you may seal all of the openings and crevices of over 3/8" not used by bats. Because bats cannot gnaw to enlarge an opening, a variety of materials can be used to seal an opening, including 1/4" hardware cloth, fly screen, sheet metal, wood, caulking, expandable polyurethane foam, or fiberglass insulation.

To block off the principal bat entry openings, either:

Other Methods to Can Be Used

Occasionally, bats enter finished rooms from their roost area in the attic or wall spaces. Interior bat-proofing, such as sealing spaces around the attic door, will prevent the bats from accidentally entering living areas of the home until the bats can be excluded from the entire structure. Because fiberglass insulation is repellent to bats, insulating walls and attic will serve a dual purpose of energy conservation and bat control.

Another bat-proofing method is to install one-way devices, tube-type excluders with plastic sleeves that collapse on themselves. When positioned at all active entry points in the home, bats can exit but not re-enter.

Other temporary methods include keeping the lights on in an attic bat roost area for 24 hours a day over several weeks when the bats return in the spring or using fans to disturb the roosting bats with strong air currents. Sticky bird repellent applied around the bat entry opening can sometimes provide temporary control.

How to Remove a Bat Flying Inside Your Home

If you are absolutely sure there have been no human or animal contact with the bat, try to confine the bat in one room, turn on the lights, and open the windows. Because bats are able to detect air currents, they will usually leave at their normal time of activity in the early evening.

If the bat is observed to land, it can be covered with a coffee can or other suitable container. While wearing heavy protective gloves, slide the container lid or a piece of cardboard under the container. If you are absolutely sure there have been no human or animal contact with the bat (and after reading the final section of this pamphlet, it can be carefully released outdoors. Some pest control companies or animal control officers will assist in the removal of a bat.

What if i'm Bitten, Scratched or May Have Come in Contact with a Bar

Bats are not normally aggressive animals. However, caution should be used to avoid direct contact, even with apparently healthy bats. Unusual behavior, such as a bat fluttering on the floor, or a bat flying in midday, is the reason for particular care to avoid all human or animal contact with a bat.

In recent years, bat-associated strains of rabies have been the causative agent for the majority of the few human rabies cases in the United States. In some of these cases, rabies transmission occurred even after apparently limited contact with a bat. Because bat bites may be less severe, heal rapidly, and therefore, be more difficult to find or recognize than bites inflicted by larger mammals, rabies post-exposure treatment should be considered for any physical contact with bats when bites, scratches, or mucous membrane contact with saliva cannot be excluded.

If you are bitten or scratched or the possibility of contact can not be excluded, try to confine or kill the bat without damage to its head, to prevent additional exposures. Immediately cleanse the wound thoroughly with soap and water, and seek prompt medical attention from a physician or hospital emergency room. Report the bite or other exposure to your local health department as soon as possible. Using heavy protective gloves, tongs, or a shovel, place the bat in a coffee can or other securely covered container and arrange with your local health department for immediate delivery and testing at the New Jersey Department of Health and Senior Services Rabies Laboratory.

If your dog or cat is exposed to a bat, follow similar procedures in capturing the bat and contact your local health department to report the incident and arrange for the testing of the bat. The greatest preventive measure is to have your dog or cat vaccinated against rabies before any exposure to a rabid animal.

The large number of bats found in New Jersey play very a important role in the control of nuisance insects. Because a small number of bats are found infected with rabies every year, it is important that you understand the habits of those bats which commonly enter houses. This will help you exclude bats from buildings; this will also tell you what to do if a human pet comes in contact with a bat. For more information about bats and rabies control, contact the Hunterdon County Health Department at 908-788-1351 or email the Department of Health 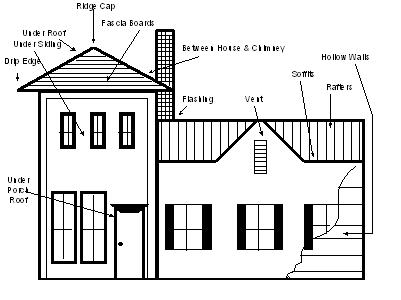