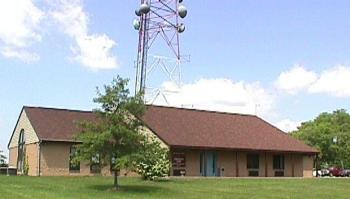 After several false starts earlier in the decade, the plans for a brand new communications center, to be built on three acres of land next to the existing property, were approved in April of 1986. The 6,800 square foot building would house a 900 square foot Communications Room, administrative offices and the Division of Emergency Management. By that time the staff had grown to 10 full time operators, 5 part time operators, 3 supervisors and 3 administrative personnel. The old building had become so overcrowded that to get from one side of the dispatch room to the other, you had to literally go out of the room and through the lounge and the men's room.

The cost of the new facility was estimated at $700,000. Since Emergency Management was incorporated into the design, some federal funding was available to offset the cost to the county taxpayers. Construction began on the new building in late 1986, and it was slated for completion the following year.

1987 brought other changes to the emergency service community. The first Hunterdon Medical Center Mobile Intensive Care Unit came on line and began Advanced Life Support (ALS) service to the residents of Hunterdon County. The addition of ALS would dramatically change the way patients would be treated from then on.

The 1980s also saw the New Jersey State Police take over as the lead agency for the Division of Emergency Management. The State Police became very active in planning for disasters. The cold war days of Civil Defense were over and every municipality was required to have a written plan for dealing with a variety of disasters and hazards. This would be no easy task and more staffing would be required to accomplish this monumental task. 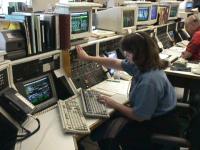 Moving day finally came on December 17, 1987. The dispatch room seemed almost cavernous compared to the farmhouse. You could literally walk around the perimeter walls without bumping into something. Someone even took the time to figure out that 66 laps around the room equaled 1 mile. There was a spacious conference room and plenty of storage. But that luxury would be short-lived as Hunterdon County would again experience a growth spurt in the near future. Sadly, retired Chief Dispatcher Norm Scheetz passed away after a long illness only 13 days before on December 4, 1987. He never got the opportunity to see the new center in operation. 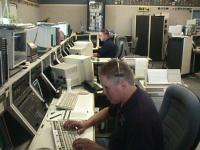 In April of 1988 three more operators were hired and Robert Anderson was promoted to the position of Assistant Director and Deputy Emergency Management Coordinator.

In 1989 it was recognized by many New Jersey public safety officials, including Director Alan Armitage, that a statewide 911 system was needed and the 911 Commission was formed in April of that year. The purpose of the commission was to formulate the rules and regulations that would eventually establish the technical 4requirements and operational standards for all components of the Statewide 911 Enhanced Emergency Telephone System. They would be responsible for setting the standards for planning, equipping, staffing, establishing, operating and maintaining Public Safety Answering Points (PSAP), Public Safety Dispatch Points (PSDP), and the Enhanced 911 Network in New Jersey. In 1990 Mr. Armitage was appointed by then-Governor Thomas Kean as one of the first 911 Commissioners.

Enhanced 911 brought changes to the way dispatching was done. No longer were rural delivery addresses acceptable. Street names and house numbers were needed in order for the system to work. Sending a fire truck or an ambulance to RD 5 Box 2 just didn't work, unless you mailed them. Each municipality had to establish a street addressing system that would conform with the new system. To help coordinate the changes, the position of 911- Coordinator was established and John Strauss was promoted to Supervisor of Communications to take on those duties.

Hunterdon County received a $364,000 grant from the State of New Jersey to establish a state-of-the-art Enhanced 911 System. After working with United Telephone (now Sprint), the county installed the CML ECS 1000 switch and equipment that would allow a dispatcher receiving a 911 call to know not only the telephone number of a 911 call, but also it's location. Automatic Location Information (ALI) shows the dispatcher all of the pertinent information that is required for dispatching a call. It includes not only the name and address of the caller, but also recommends the emergency response agencies. 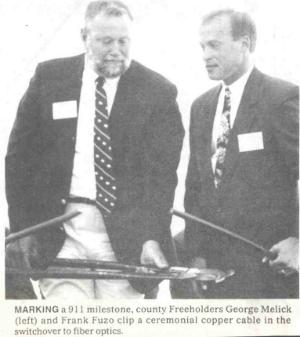 On June 23, 1992, after months of installation and testing, Hunterdon County turned on the new system, becoming the fifth New Jersey county to be up and running on the Enhanced 911 System. A dedication ceremony was held and dignitaries from throughout the state and United Telephone (Sprint) were on hand to help celebrate. At the time, there were some technological firsts including fiber optic cables and digital switching. A ceremonial "cable-cutting" was done by Commissioners George Melick and Frank Fuzo to signify the cutting over to the new fiber optic network.

Also installed in 1992 Computer Aided Dispatch (CAD) system and a computerized mapping system. With the push of a button caller information could be moved from the 911 screen to the CAD and at the same time draw a map to show the callers location.

January 1, 1994 rang in some personnel changes at Hunterdon County Communications. Director Alan Armitage retired and moved to Colorado and built a beautiful home in the mountains with a great view of Pike's Peak. Robert Anderson was appointed the new Director of Communications and Emergency Management Coordinator. The Technical Division was formed with the promotion of Harry Heller to Technical Supervisor. More operations staff were hired and additional shifts were added.

The next few years were relatively uneventful. In 1997 another of the original dispatchers passed on. On November 12 Dale Hapes (Operator 8) passed away after a lengthy a respiratory illness. Dale had been a long time dispatcher, having operated the Flemington Answering Service, an agency responsible for dispatching emergency service agencies in the Flemington area prior to the county system being put in place. Dale is survived by his wife Jane and son Eugene. 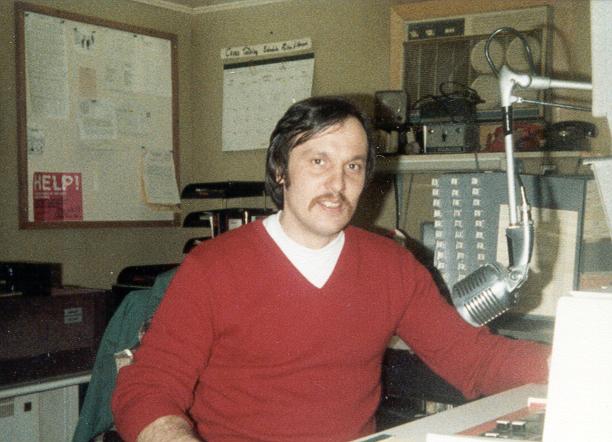 1999 started off with the rumblings of getting ready for Y2K. Planning for what would end up as a non-event began to pick up speed. "Y2K Compliance" was the catch phrase for 1999. Well, we all know what happened.

On June 9, 1999 we were saddened by the passing of Senior Operator Joe Stepanovsky (Operator 9) at the age of 52 after a long battle with cancer. Joe was one of the first operators hired in 1976. He was a dedicated employee who worked hard for the county. At the time of his death Joe was also president of the Communications Workers of America Local 1035. Joe left behind his wife Donna and a step-son.

September brought us the remnants of Hurricane Floyd as a tropical storm. Though Hunterdon was hit hard with more than $8 million in damage, that figure paled in comparison to the damage done in seven other New Jersey counties. Even though Hunterdon was hit pretty hard, we were able to send rescue boats and fire apparatus into neighboring Somerset County to assist them. 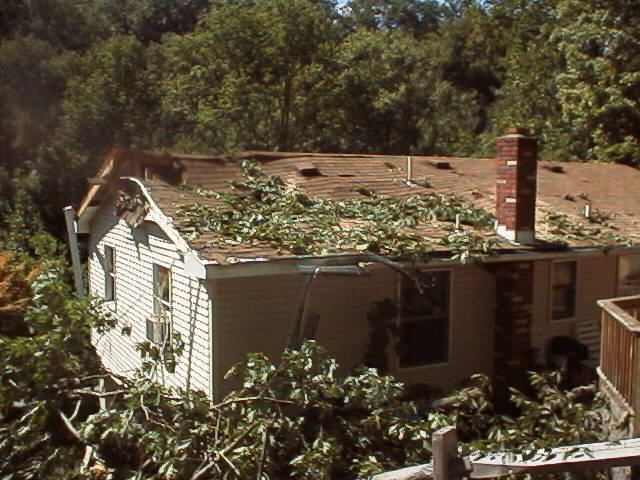 Hurricane Floyd also brought another fact to light again, and that was that we have outgrown our facility. The Emergency Operations Center was woefully inadequate to handle the demand of 40 plus people over an extended period of time. That was the impetus to look closely at enlarging the facility.

Y2K came and went with nary a whimper. The lights stayed on and the world didn't end. But had there been problems, we were ready with extra staff and plenty of food and generators to go around. However, the prophets and the doomsayers had to find another line of work.

In February of 2003 bids for architects were solicited and the firm of L. Robert Kimball and Associates was awarded the job to begin the design of an addition to Emergency Services Building putting all services under one roof. A new communications room ws planned that made the old dispatch room more than twice the size to handle the present-day needs as well as address any future growth required. The room that is now the communications center will be converted to the new Emergency Operations Center for the Division of Emergency Management.

Sadly, on July 13th we lost another original operator when Tom Montross (Operator 5) passed away unexpectedly at the age of 50. Tom was the first dispatcher hired in 1976 and worked for the county until 1987 when he moved to Virginia to start his own business. Tom left behind his wife Karen and three sons.

June 25, 2001 marked the 25th anniversary of the Communications Center and a celebration was held on July 14, 2001 in conjunction with the dedication of the new Mobile Command Post (known as Command 86). The Mobile Command Post was turned over to the NJ State Police and the NJ National Guard to be used as command headquarters at Liberty State Park on September 11, 2001 after the attack on the U.S.

In 2004 an addition to the Communications Center was completed. 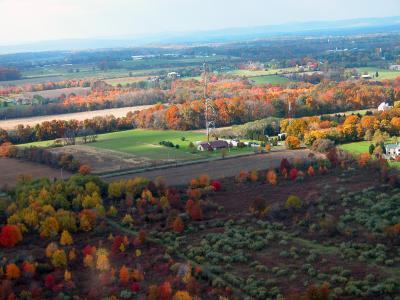 Our present facility was opened for operation in December of 1987. Prior to that we operated out of a four room farmhouse. The 6,000 square foot building was designed to increase the efficiency and coordination of the many functions associated with 911 and Emergency Management. During emergency situations, location of the communication staff in relation to their equipment was a major factor in design to enhance response time and disseminate information as quickly as possible. The 900 square foot Communications Room, which serves as the central location for all emergency communications, was designed to insure the proper conditions are present for both the Public Safety Telecommunicator and equipment to perform harmoniously with the least amount of environmental stress possible. This area is in continued use 24 hours each day, throughout every day of the year. Plans are currently being developed to expand the communications center to accommodate the growth of the system since 1987. A new communications room and adjacent offices will allow more room for the additional staff that will be needed both now and in the future. The current communications room will be converted into the Emergency Management Emergency Operations Center. The project is anticipated to start construction in 2002 and be completed in 2003.

On February 1, 2017 the County celebrated the 40th Anniversary of the Communications Operations in Hunterdon County.